As a sumo wrestler, there is a bigger commitment than the one of promising your best effort to defeat your rival. Practicing the sport implies making a lifetime promise and to swear devotion to its ancient traditions. Photographer Paolo Patrizi takes us on a journey to Japan and shows us the daily life inside a sumo training stable.

Sumo wrestling, born in Japan many centuries ago, is one of the country’s most popular sports. However, many of us may not be aware that along with the rules of the game, there are also a set of sacred ancient traditions and rituals, which the wrestlers are expected to follow strictly. The majority of the wrestlers lives under control, in training stables, or beya in Japanese, where every aspect of their life is highly regimented, from what they eat to what they dress. The photographer Paolo Patrizi visited some of the beya in Japan and documented this reality.

The inspiration for the sumo story came from an almost obsessive desire to understand the Japanese stoicism. The sport-ritual of sumo is dear to the Japanese because it reflects in microcosm many of the values that Japan holds dear. Japanese society places enormous importance on rank and hierarchy— and the world of sumo does the same. Japan is a nation that cherishes rules and respects authority, and in sumo this tradition is unyielding.

The rishiki— the japanese name for sumo wrestlers,  are expected to show stoicism in a way that they should never feel or express self-satisfaction and losers should never complain. At the end of a bout, the rishiki should bow respectfully to each other and step silently down from the ring. 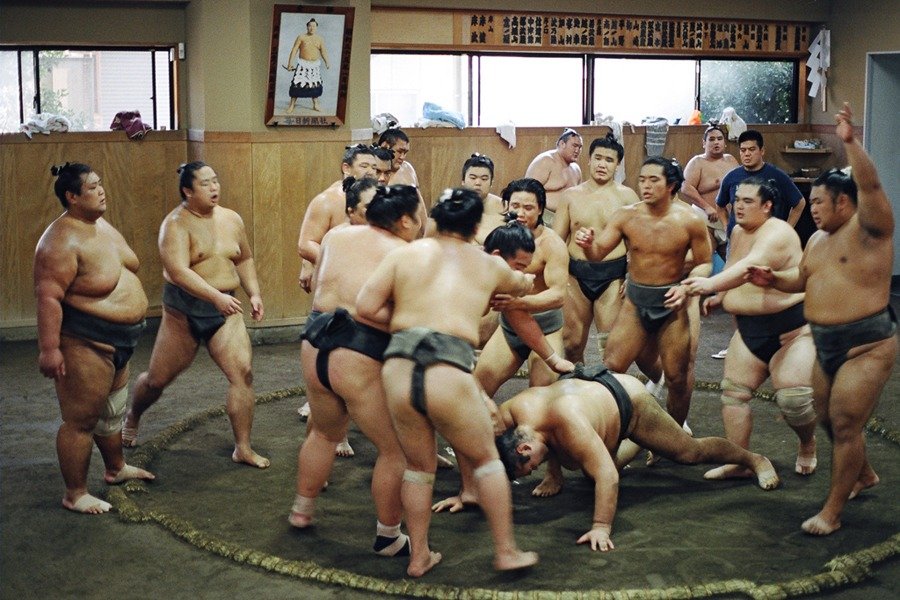 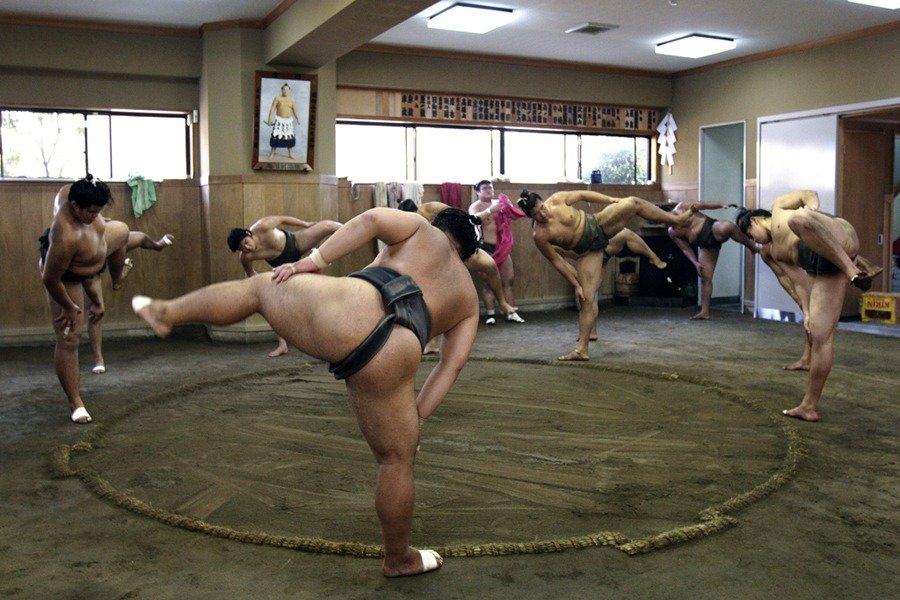 Sumo is one of the most ancient expressions of Japanese culture, where champions are regarded as national heroes. Professional sumo wrestlers appear in public in a kimono or a silk robe looking just like a samurai without a sword.

In reality, sumo began as a rite of Japan’s Shinto religion and a significant religious aura surrounding every wrestling match remains until the present day. The ring itself is a sacred place, and that is why wrestlers must throw a handful of purifying salt before them every time they step onto the holly clay. 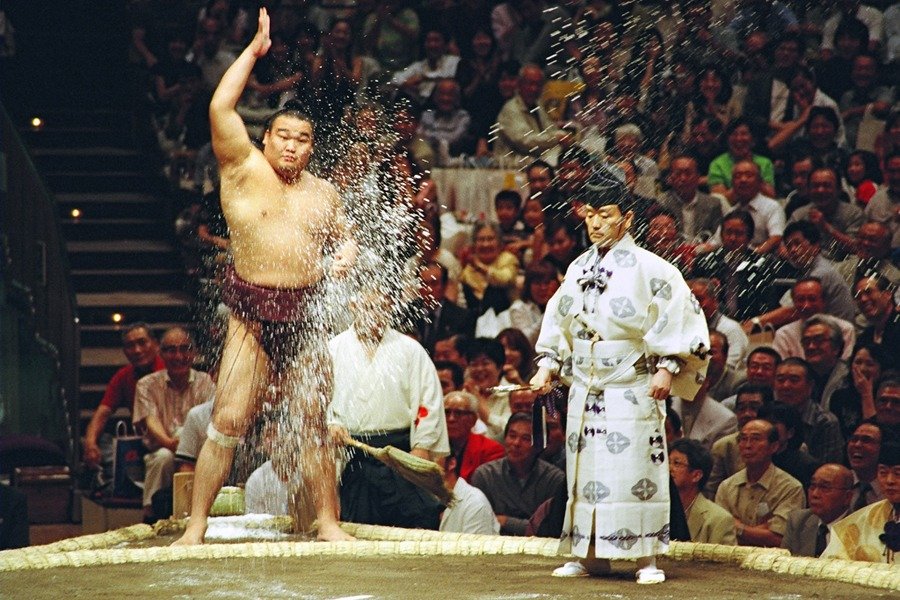 The sumo seen on TV is only the tip of the iceberg. A sumo beya or heya is a bit like a boarding school or monastery. The only women in a sumo stable are the wife and daughters of the master, and if a wrestler wants to marry, he must get the master’s permission and will usually be told to first reach a certain goal and then move out to a place of his own.

I also had to abide by the rules and even though I had an official permission from the Sumo Association, during the first few days in the sumo stables I could hardly move. It was only after gaining the trust of the senior wrestlers that I was invited to have lunch with the Grand Champion and given access to their private moments. 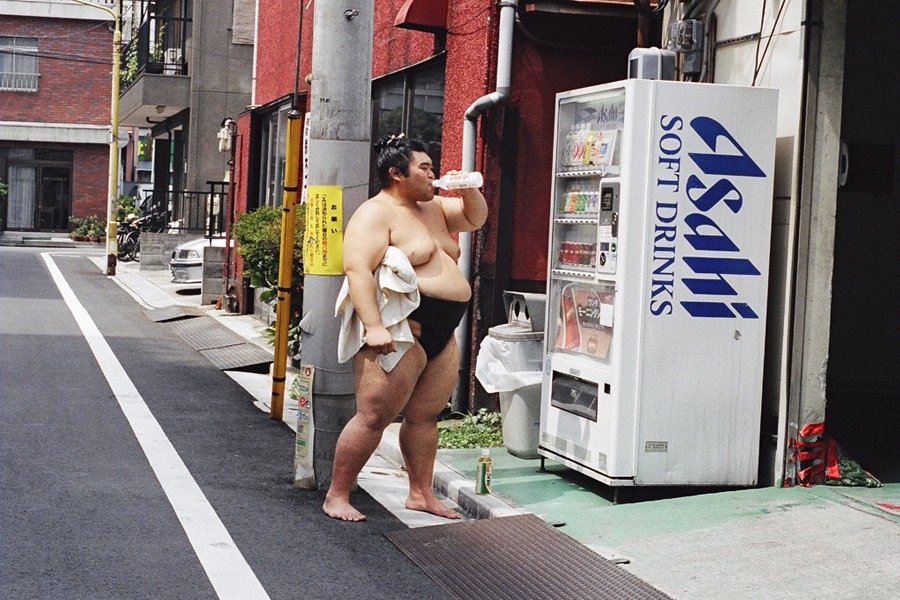 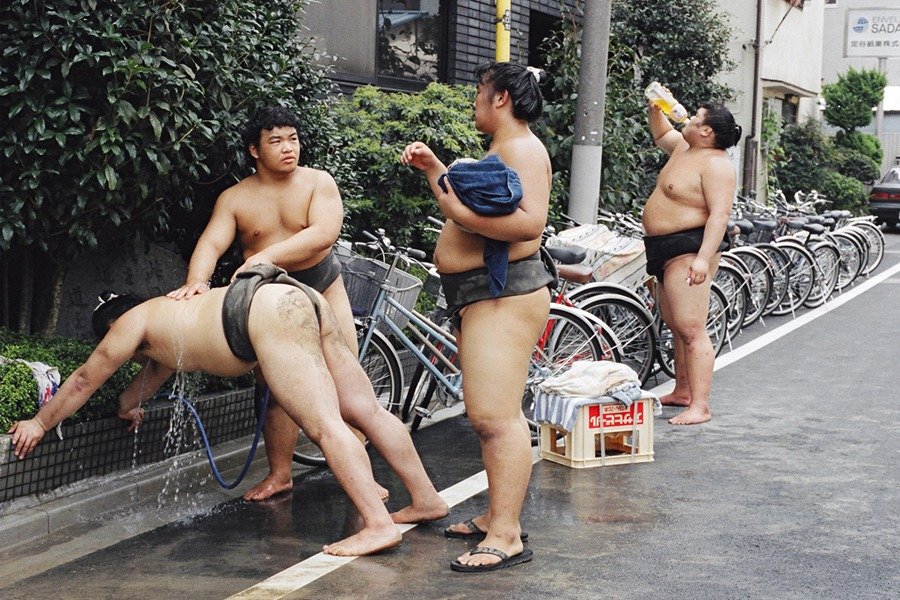 Training is a vital part of the lives of the wrestlers and it starts in the morning, around six or even earlier. After training, the lowest rank of rishiki starts cleaning and cooking, while the junior apprentices prepare meals. In fact, many of them become cooks if they don’t succeed in sumo. Additionally, nobody is allowed to eat until the most seniors have finished training, have had their topknot re-done by the stable hairdresser and have had their baths. 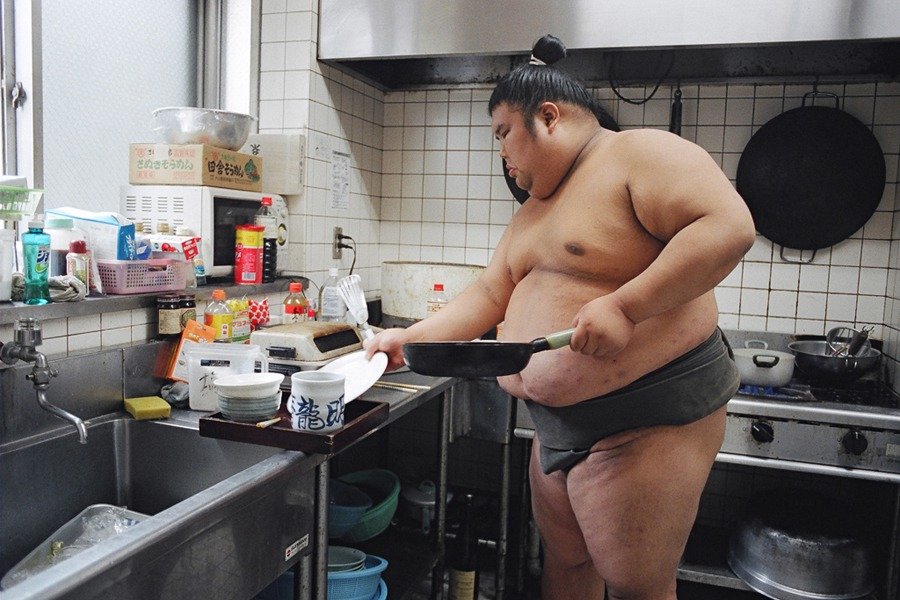 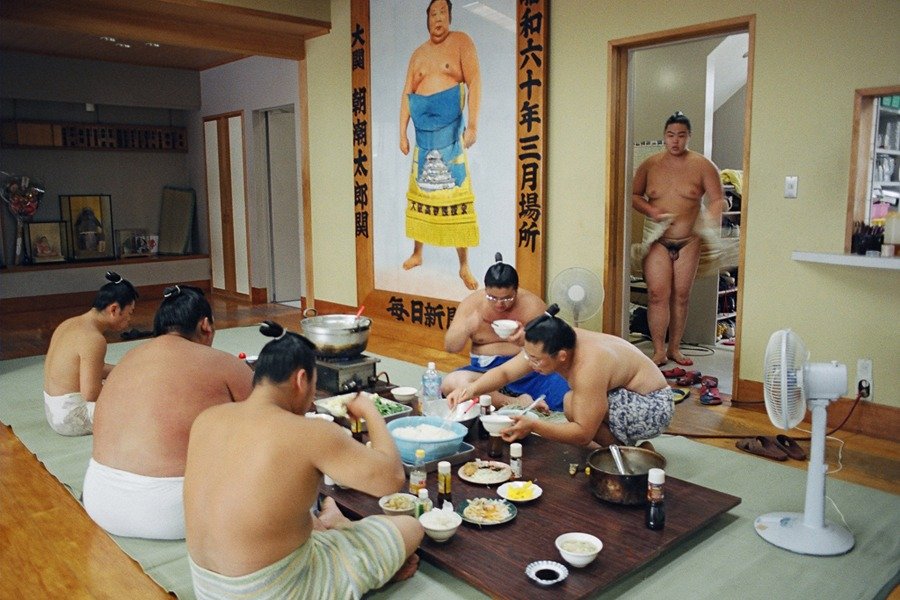 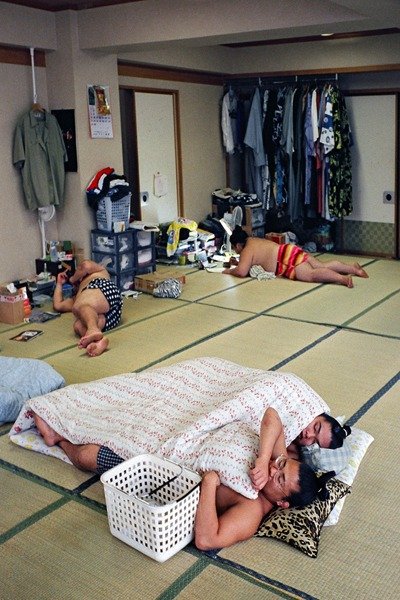 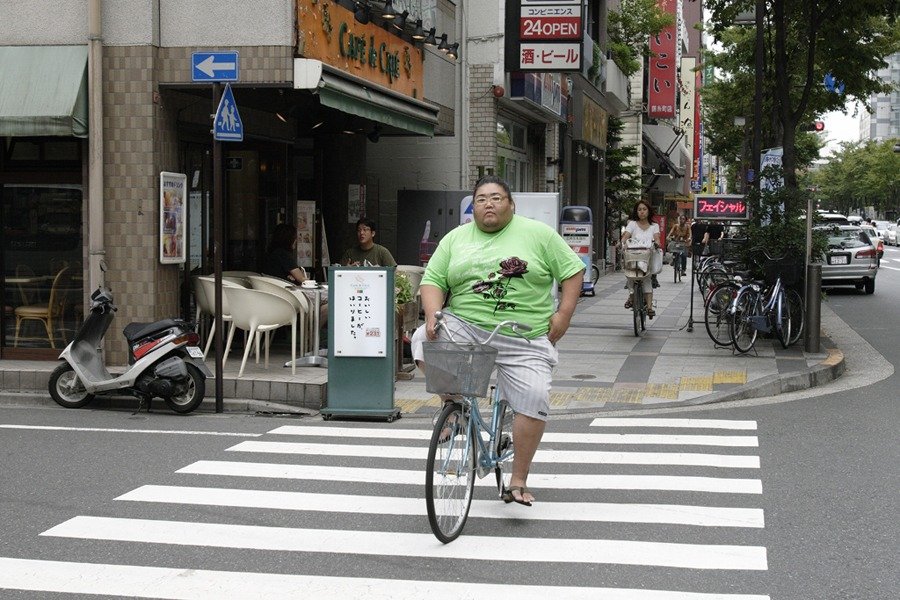 Although there is an aura of admiration and respect for the sport, a much darker aspect of reality is looming large in Sumo. Several scandals have been disclosed, in which the involvement of mafia and illegal activities have become as obvious as obesity and top-knots.

Dozens of rikishi and their managers engage in illegal betting run by the Japanese Mafia, Yakuza. In many cases, the Yakuza also sponsors wrestlers in order to get a front-row representative seating and discretely communicate with imprisoned members who might be watching the match.

“The scandals that periodically rip through the Japanese media are efforts to rectify outrageous excess within the sumo organization and indeed the Japanese bureaucracy, but they do nothing to address the structural corruption that is the normal state of affairs. It’s a genteel, smoothly organized, even institutionalized, form of corruption […] and thus not usually seen as corruption as we ordinarily understand it.” 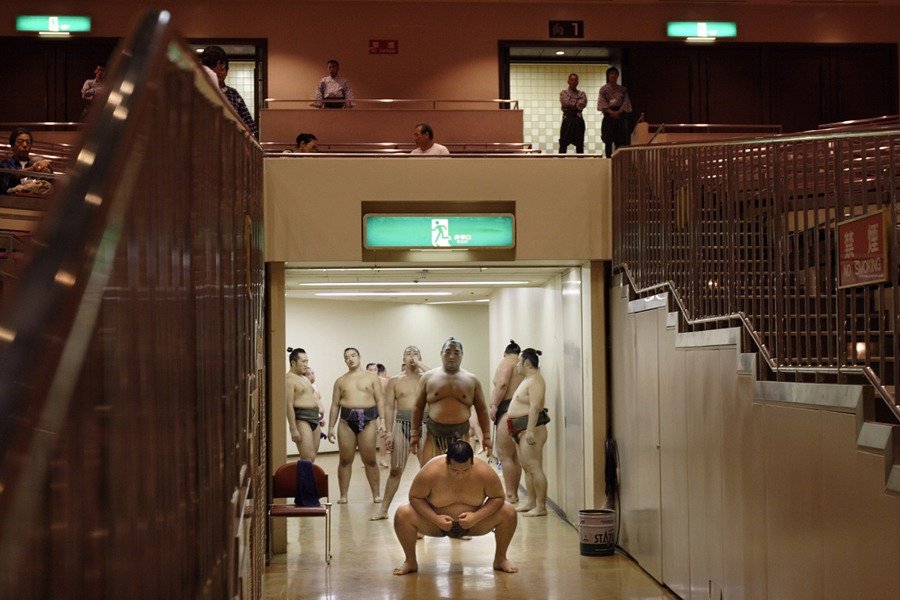 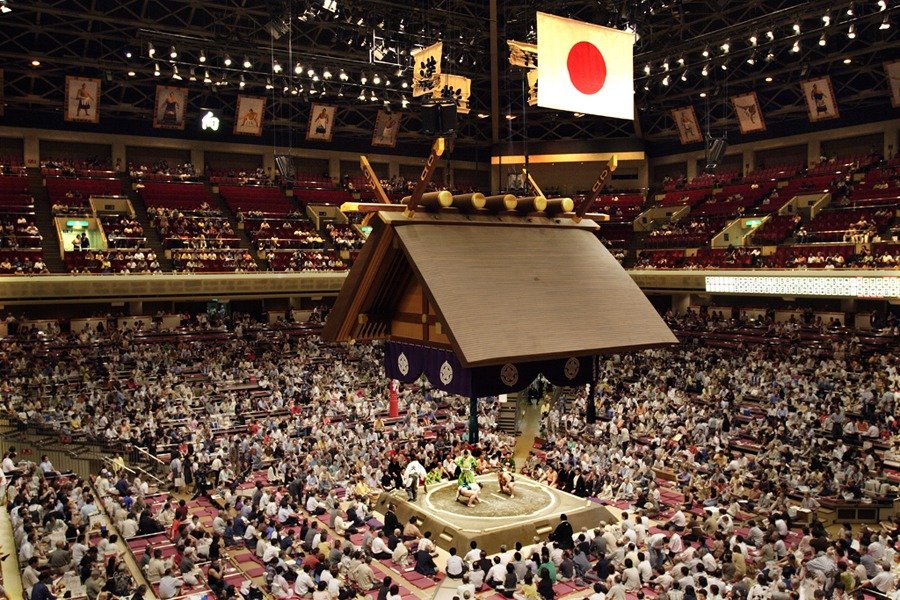 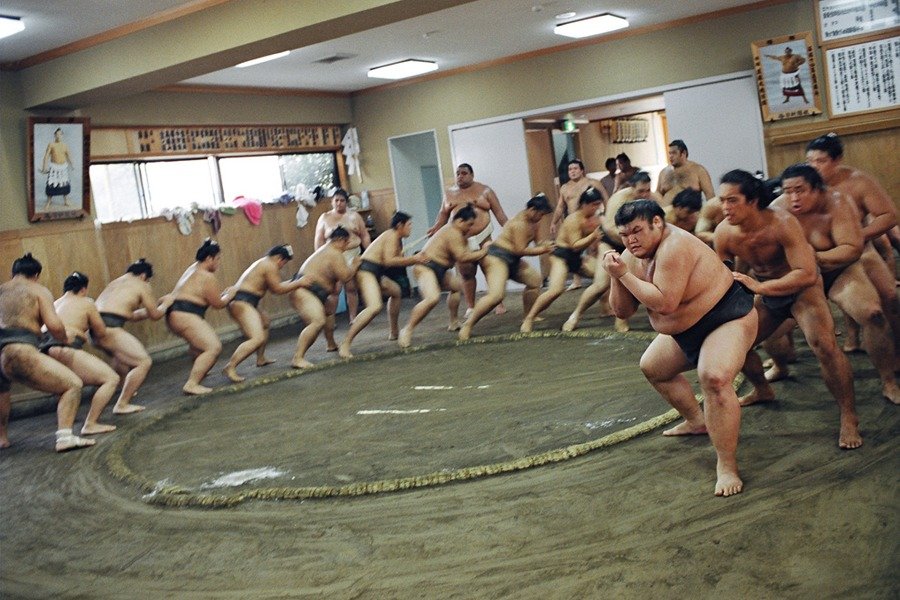 Paolo Patrizi is an independent documentary photographer. He was based in Tokyo for almost ten years where he focused on exploring the gap between Japan’s traditional image and the modern reality that has riven the nation’s present culture. Many of his photographs reveal the contrast between Japan’s contemporary ugliness and its traditional beauty while exploring the cultural disconnections produced by rapid economic growth.

Paolo pictures can be found in several leading publications such as GQ, Stern, Vanity Fair, The Guardian, and Sunday Telegraph Magazine. You can find his work in international exhibitions and in the permanent collection at the Museum of Fine Arts, in Houston.  His work has also been merited with The Sony World Photography Awards, The John Kobal Portrait Award, The Lens Culture International Exposure Awards, and recognized by the Association of Photographers of London, among others.

To see more of Paolo’s portfolio visit his website or take a look at his Cherrydeck profile. ?

To discover another challenging way of living, visit our post about Life in an E-Waste Land, here.